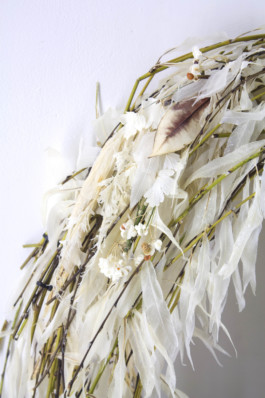 The works explore the labour of care – e.g. the maintenance and cleaning - on a burial ground of unidentified individuals and the inherent potential act of inclusion of these activities. Disposed vegetation, including both maintenance and grieving residue of

plants were collected on site. These were later processed by removing the chlorophyll, but the energy is still preserved in them, in this way creating a pause in their cycle.

An image, originally a private belonging removed by bailiffs, was re-bought at an auction. The print, depicting a scene of labour in the landscape was later altered by exposing it to the exact amount of energy consumed by a body in the act of laying a stem.